I recently bought Cyberlink's PhotoDirector software. I intend it to replace PS Elements (v10, more or less) as my primary editor and catalog keeper. Adobe did not get me to subscribe to PS or now Lightroom but it's clear they believe the cloud is the future. For their profits yes, but not holding my images for ransom thank you.

My first big test came this past weekend after I wanted to stitch some GX1 raw images of lake Sacagawea and autumn colors. The merge was as easy as could be, just about like elements. I then played with the merged file and saved out a 49MB image.. perhaps it should get printed?

The software appears to do all that i would ask. It has curves and a 5-zone slider set to adjust lighting, color adjustments and white balance, even simple HDR &tone mapping adjustments. It can save tiff and png as well as adjustable jpeg.

I was surprised by pd8's exceptionally yellow leaves on the right side of the image; I like to think I'd have noticed that while on site!  I did adjust many things from the original raw file, but I did not seek to emphasize yellow in particular.

So I tried Polarr's raw processor to see how that tree looked: 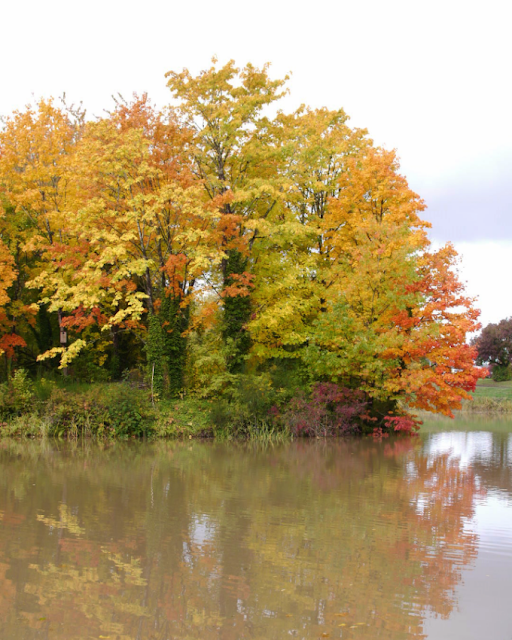 Sure enough, that strong yellow foliage is not quite what Polarr sees.. strong color yes, but not as extreme. The orange on the far right is different as well.

adrift in a sea of gear

What would really satisfy me, "once and for all"?
It probably doesn't work that way - but if I could manage it, what then?

My perceived needs include weather protection, in-body stabilization and a tilt screen, preferably with some touch controls.  That would narrow me down to Pentax, SonyAlpha, Olympus and very recent Lumix bodies.

Since budget is paramount, that limits me a bit more. It would be best to go with a past-generation Olympus so my current lens set can do the job. I have neither Pentax nor µ43 lenses with weather seals so no gain there; if I had a choice I'd take the 12-60 Lumix again at some point.

Now I already tried the EM5 mark I and it didn't appeal to me much. I wish it did, since it has weather seals - but one cannot force these things. The GX7 was really nice the first time, less so the second time; I still cannot quite explain that! The EM1 Classic stands as the item of choice on a budget. That includes many features that sound quite interesting. Its video setting is primitive yet still more complete than Pentax models, with AF or tap-MF available. The EM1 also has live time/composite and PDAF points on the sensor, good features all.

There are a few things the GX1 cannot do well, but really it does nothing poorly either. I'd love more battery life and better AF talent, but it's better than I am in most cases. I recently learned more about Pinpoint AF and that choice has helped me on several occasions.

I've just skimmed my past posts* and learned just how big a problem I have with holding on to camera gear. Several absurdly excellent kits were tossed back into the pool for pathetic reasons. I called myself out several times, and then excused my behavior as financially driven. That's only true because I overreached when I already owned really nice gear but wanted more - and that's entirely on me and my collecting/hoarding illness.

* Of course I don't read my own blog, I write all this for mythical others.. or so I've told myself.

Could anything embarrass me more than this note from April 2015?

For a total of $118 I have two |k-r|bodies in like-new condition with a total of 130 shutter actuations.

Well perhaps this from July of 2011?
The k-x became a k-r, and several lenses came swiftly. Some were bargains, others simply irresistible - but the result was too many lenses, especially considering that family health issues kept us from traveling to photogenic places. I took some great shots of the yard and my bike commutes to work.. but any camera could do such things justice.

Or even Nov 2010?
So why don't I just buy more Pentax stuff with that gift card? Fact is, I'm all out of 'needs' there.   I have modern lenses (16-45, 50-200 and 55-300) plus a half-dozen manual primes and intermediate zooms.  I have a nice tripod and a flash sufficient for my needs, and several SD cards.  Not only is that enough, it's too much - especially as I've been homebound and not able to use much of this.
A smaller camera with decent IQ would provide just as much camera satisfaction and be a smaller cash drain. 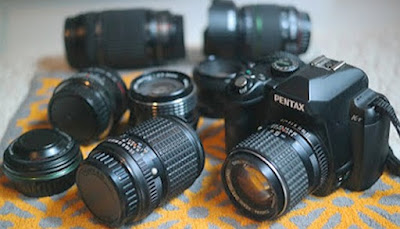 What cameras have I owned in the past five years? Let me gasp as I count them - and several were owned more than once..

What have I gained from all this? Precious little.
What I lost: time energy.. and now, self respect.


And with this fresh in my mind,
I shall walk away from 'gear talk' on this blog for a spell.

Curiosity sent me over to the Dyxum.com website, my old SonyAlpha hangout. After a bad guess or two I even came up with my ID and password, which had not been used in perhaps seven years? Always a surprise when something reappears like that, since I cannot remember yesterday's breakfast most days..

I updated my contact data and even posted a question about gear.

Nothing about imaging is certain for me right now, other than dissatisfaction with what I have + no funds to make any moves whatsoever. The GX7 was a financial casualty and the GX1 provides decent images on occasion but not what I had hoped. Actually the second go-round with the GX7 wasn't really great either. Given my small collection of Pentax gear that makes the most sense.. but why not consider an elder Alpha as well?

I am not a superstitious person. Even so..
In 2009 I took the a200 Alpha to the Sierra with my wife on our Yosemite backpack trip. In June 2010 I switched over to Pentax and felt good about it. Just over a month later my wife fell ill, and remains so to this day. In fact her illness struck a week after the A200 was sold!
Of course Pentax has absolutely nothing to do with this.. absolutely. My wife will not get better because I return to alpha gear. Nope.

I look back with many regrets about gear, but no time travel is allowed; I must live with such things.
In fact it's time to review my blog history and learn something about myself!

How many ways can one acquire technical fatigue?

As a result of these issues and more it's time to declare a moratorium. Comments to gear threads must stop, even if I have a reasonable comment. Too often my unreasonable comments take precedent, whether silly or snarky; a waste of bandwidth and both the writer's and reader's time.

Wish me luck, I shall definitely need it. 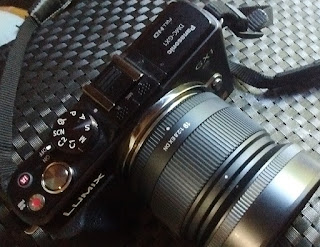 The Sigma 19mm has arrived. It's a fine lens for my use, determined after a day of tests which included a quick tour of Laurelhurst park in Portland.

The GX7, Lumix 14 and Sigma 30 departed for evaluation and purchase. My best hope is that they overpay for the first two and send back the 30mm, so I can have a matched set of EX DN lenses!

With the GX1 missing out on stabilization the primes become less useful
despite their improved light-capture and overall IQ - so OIS lenses are
more useful. A Sigma 19/2.8 is on its way though for 1-lens shooting days.