another dip in the pool ('dip' is a verb here)

I watched with surprise and disappointment recently as the only 500+ gram lens I'd ever want was being sold in a forum I frequent.  The price dropped a time or two, and nobody jumped on it.  It dropped again, and sat a week.  Taunting me!  :^)

And so, again, I snapped.  I scraped together funds from a few untapped sources and bought a Sigma 50-150mm f/2.8.  This now becomes my most-expensive lens, and easily my heaviest.  It should be worth owning despite the bulk: two stops faster than the DA50-200 and slow 100-300mm zooms, and nearly a speed match for the DA70 Limited.  (I admit that I tried to move that lens first to cushion he blow; it's a hard lens to lose though!)  I already have 67mm filters for the DA16-45 so the 50-150 makes a great pair with it.

I expect that its output will force me to re-evaluate my weight limit on lenses.  Yes I've been a weight wimp, 450 grams / one pound lenses have been the max - but it's my hobby and I play it my way!

A day or so later the Samyang/Rokinon 8mm f/3.5 fisheye went on sale, for $60 less than its typical best price.  That one was more likely to be added in my imaging future, and the 'wait' is over.  The 15mm lenses are too close to the DA16-45 to justify, but the 8mm fits nicely in my kit.  In its Pentax iteration it even

So now I have yet another Pirate lens, one to make me say arrrrgh!

we interrupt this program... breaking news!

The wheels are in motion for a move!  Well more precisely, a storage unit
is not in motion, but stationary in our driveway.  Same result though. 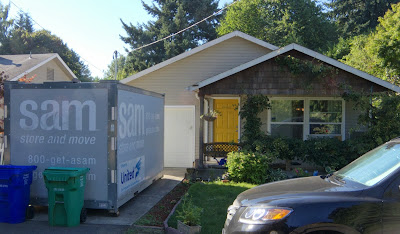 Leaving this city will be a first for me, after 56-plus years - and my bride will sell and buy her first home ever.  The news won't actually break us, in fact it will free us from breakage in some ways - and if we pack carefully nothing at all will actually break.

We won't be moving very far, but it will definitely count as moving.
This effects of this news will trump most picture-taking for
the coming month or two, so that makes it worth noting here.