The latest official report is that Portland's up to 23.2 inches of total snowfall this winter. For PDX, that's a lot: #15 on our snowiest winters*. In my lifetime only 1968 rises higher, #9 at 34" - but no white Christmas in '68, and no flakes on my birthday so there. Speaking of which, we're nearly through the gauntlet of holidays now: Christmas, anniversary, birthday, then Valentines Day (no, Super Bowl Sunday doesn't count :^). We celebrated quietly at a local Irish pub which serves gluten-free beer. The next morning we had about 2" on the ground, so my birthday saw plenty of flakes and overnight accumulation! Add about an inch more on the 27th and that's where we stand. Here is a particularly nice image from the most recent storm: 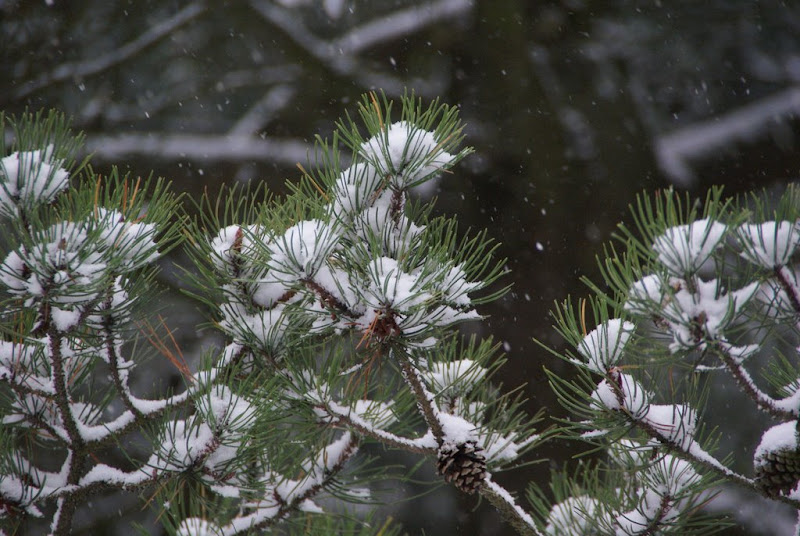 *I just noticed that, if you remove 19th-century reports from the list, we're #5!

We had a fine time in Centralia for our 2nd anniversary! Amtrak and McMenamins' Olympic Club did the work, we just went along for the ride. The Club is an old-style place, stuck in the early 20th century when water closets and showers were down the hall. We wandered through downtown and picked up a few fine antiques including a nice old mantel-clock, had great meals and watched the latest Bond flick before turning in Sunday night. It's a two-hour train ride and a one-block walk from downtown Portland to the Olympic Club, and mostly-clear skies kept things chilly but pretty all weekend.
Now it's on to the next event. Sadly, I felt crummy on Inauguration Day, when we had hoped to go join a local celebration; my wife was crushed, for a while. Now it's my birthday and time to party again - I'm not 100 percent but will do my best to be energetic this weekend. What a stretch this past month has been!

A few shots of the fun can be found Here!

Well, for the most part we survived December '08 - the snowiest ever, breaking the 1968 record (whoopee!).  It also broke long-standing records for Christmas-day snowfall and snow-on-ground on Christmas day.  Now I've truly had a white Christmas in Portland, and seeing our lack of snow-removal equipment it's clear that white Christmases in Portland are a bad thing.  Sad, but true.  My sister is now dealing with water seeping into their newly-renovated basement, and floods are becoming a problem as warm rain on old snow looks for a way to the Pacific.

I began 2009 with a high-quality head cold, with a bit of anti-fever (97°) thrown in.  Despite my lethargy and stuffiness, we headed north to visit my in-laws - the trip we were supposed to take at Christmastime. **  We used all twelve days to get Christmas in this year, with a final gift swap occurring on January 5th, the true Epiphany day from my childhood.  Beyond the visits and a few more bits of loot, my wife's cousin was married, so that added to the festivities.  Our own anniversary is coming up next week, so I'd better stop typing & start planning :)

** While there, I added at least four more inches to my winter snowfall total.. in fact, the morning we left town Portland added another 1½" (after 2" of rain - that must have been quite a snowfall to stack nearly two inches of snow on standing water!!).  At a rough guess I've now seen (12+2+5 =) 19 inches of snow, which must be a lifetime best as well. Rumors have reached me of another cold spell late in January, so we'll see where my final snowfall amount ends!