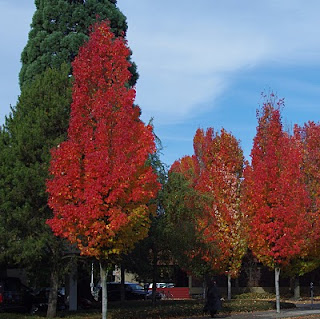 What a colorful time! The blue skies departed soon after this; too bad, it always helps to emphasize the leaves. 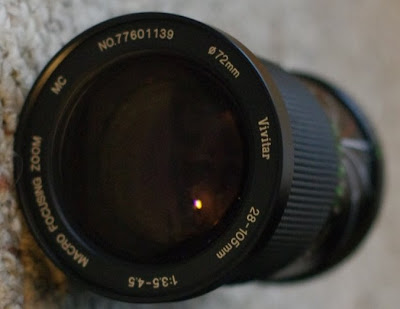 I've acquired several interesting lenses and had a few pleasant surprises, but overall if I'm keeping just one it's the Kobori (serial#77xxxx) A-enabled lens. Some were dismissed after a few tests, but the top three were worked over more thoroughly.

The A option is a big plus, although the Sakar matches that and has better range. On the other hand, I like the sub-500g weight of the Vivitar; 800 grams is just too much bulk for me to carry cheerfully! It also has the curious minimum focus setting which varies by focal length: the more you zoom the closer the focus, ranging from just over 8' at 28mm to 6' at 200. I had a newer Tamron 28-200 in my Sony days that was weak beyond 120mm, so I was quite surprised to see one of the earliest versions of this type perform so well!

the other lenses are all manual-aperture only..
The 28-105 goes close and reaches 1:5, but they nearly all do and the Ricoh goes 1:4. I feel the 28 wide end beats the Rikenon 135 tele, and colors with the Ricoh lens are biased warmer even using auto WB. How that happens I still don't understand, but there it is. The Sakar does the least with close focus, but given it has the longest FL range it had to compromise somewhere.

The one-touch zoom/focus design won me over, since part of my manual-focus motivation is for video use. I'm well covered in AF now, but video doesn't care and using one hand feels right with video shots. So despite their other good points this removed the Promaster 28-70 (despite the A setting) and Rikenon 28-100 (another heavy one) from more rigorous tests.

Last and probably not least: a Kiron 28-105. These are very well thought of, and it should have rated near the top. Sadly, it came paired with the 28-100 and is a Canon mount - so it's not for me. The images on the auction were vague, I didn't know until after I had won which lens was the Canon.. oh well, I'm glad I got to sample the 28-200. 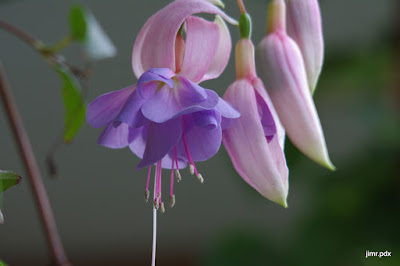 Having these lenses to square off against each other has been interesting, and while I could still do better I feel I got a very good lens, and have some degree of proof. We shall see how much the market allows me to recapture on these; a few were real bargains so I'll just about break even I suspect.

another week, another lens!

This time it's a Vivitar 28-85 in front of the sensor. Another Kobori model, it's sturdy, dense (500g) and in great shape. Sharpness and contrast are again high, quite impressive! This copy has no A setting, which other similar copies have.. so not quite as versatile on the modern bodies. Still a very good showing though.

another week, another retraction

OK, I see now that manual-aperture lenses do just fine in video mode on my K-7. I was careless enough to be in P mode before, hoping the camera could set the aperture with dials; it clearly stops down when the video is taking place, which allows for dialing down aperture settings on the lens as the video is in progress. Time to go cross out some notes on previous posts -- again.

So now I've done it: the Rikenon and Vivitar, both very good performers, were brought in for their push-pull smoothness as video lenses, so the V's A-setting is nice for stills but less relevant now. That'll teach me for thinking I'm done learning :^)

a new heavyweight: champ, or pretender?

I now possess a Sakar 28-200 f/4. It's a massive thing at 710g, solid and ambitious. I'll give it better inspection and evaluation in the next few days, but first to bed and hopefully far away from this headache. It's in good shape, I'll say that much for it!

I took the lens for a short stroll; it performed well, good contrast and decently sharp. It has a curious feature I don't recall from any recent zoom: the minimum distance to focus varies based on focal length! AT 28mm it stops at 2.5m, 70mm=2m, and so on to 1.8m / 6' from 100-200mm. Curious. It also has no 'macro' setting so getting close to your subject just won't happen; a quick test measured magnification (shoot a ruler, divide mm in long axis by 24 for aps-c) shows about 1:8. When this lens was made some big compromises were needed to have this sort of range, so they chose not to worry about close focus. My Vivitar 28-105 has a 1:5ish option at 105mm so its versatility shows there, plus being 200g lighter. Both did well in today's walkabout, but neither were able to get a sharp squirrel image on the fly like an AF lens. Some of that was due to flat lighting though; I should have been higher up the iso scale today.

So why do I own this 700-gram monster? Well, it was paired with a Kiron 28-105 on shopgoodwill website - one of the lenses was PK and one Canon, and the images were unclear on which was which. I put in a base bid, hoping the Kiron was PK, but later discerned which was which after close exam of images showed skylight filter on Kiron, UV on 28-200. By that time my cheap bid had won: less than $20 for the pair! At the very least I should break even when I resell (one or both!), at worst I donate them again. And I learn a little more about old lenses.

And the winner is.. 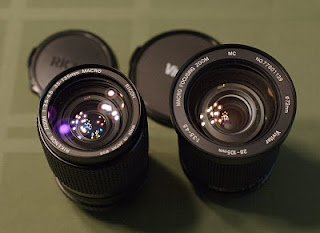 Well, there is no clear winner - both would serve very well. The (R)ikenon is a touch smaller overall but the (V)ivitar at 28mm is shorter. Miminum focus at all focal lengths goes a bit closer with R but both focus 'macro' at the same distance, the R at 1:4ish @135mm and the V 1:5ish @105mm. I cannot judge color cast since auto-WB was set, but R was a touch warmer. A bit of flare from the bright window behind my yard-stick, slightly more visible on R. All told it's too close to call - but since V uses the Pentax A mount it's the winner. Due to its design, I can use a step-down ring on the nose and use my 67mm cPL with no apparent vignetting at 28mm f/4. It may be there, but if 28mm f/4 doesn't show it in a cloudy sky it's not worth the worry.. and software could fix any that decides to show up in the future.

First impression is a good one: this Vivitar is in amazing condition, very smooth to zoom and focus. The zoom creeps like pretty much all push-pull zooms, but at a steady pace so no element-rattling 'chunk' to fret about. Images are decently contrasty, and bokeh in standard mode is acceptable if not excellent; in macro mode the shorter DOF helps. It has a very short focus, maybe 40° of rotation to reach min focus of just under six feet - a bit long by most standards. In 'macro' mode focus is about the length of my arm (105mm only) and claims 1:5 on the lens.

As to image sharpness.. well, that will need better testing. Skies were grey all day in town, so it was high iso or bust. 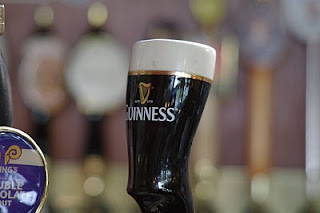 The Guinness tap looks crisp enough at iso1000, but we'll need to check it against the Rikenon 35-135 this weekend. Plenty else to do though, we'll see if I can arrange something..

PS - let's face it, this lens is plenty sharp enough. For critical images I'll be relying on the DA lenses, this is partly for fun and more useful for video. Since I've taken maybe 10 seconds of test-video twice, this is a pretty lame excuse for buying a lens! In any case it's a keeper.