what the Q can and cannot do

Well, a week with the Q has been interesting.  I feel pretty comfortable in saying this is a camera that will give you the best possible images from its sensor.  As many have noted, that's the good and the bad news; a 1/2.3" sensor is good in good light, indifferent when photons are fewer. 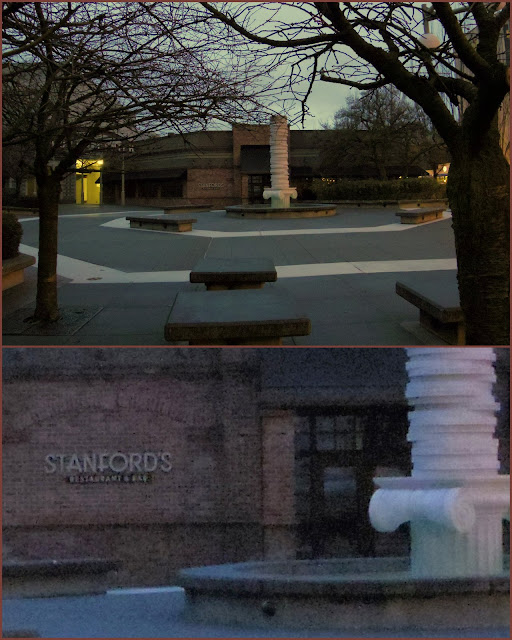 This shot looks nice when taken by itself: an iso2000 image that still has some fine detail.  Crop it down near 100% of your screen though, and the bricks are detailed yet covered in bonus data, the noisy stuff that records on the sensor but isn't really there.

Let's be honest: for iso2000 and jpeg this is still quite impressive for a tiny sensor - but larger sensors exist for a reason, and scenes like this can really look great in my K-01 or K-5 even at iso3200-4000 and jpeg.  A large-sensor lens would probably show less purple tinting in the upper-left branches too.  I have heard great things from owners about the 01 Prime lens, and no doubt it would fare better.
I should have saved this in raw format to see how clean it could be -- but that will have to wait for another pre-dawn opportunity I guess.  No doubt it can look better after a bit of post-processing; I know the Fuji F550 surprised me quite a bit with its 1/2" EXR sensor.  Sooner or later I'll check the Q's raw abilities & post that answer here. 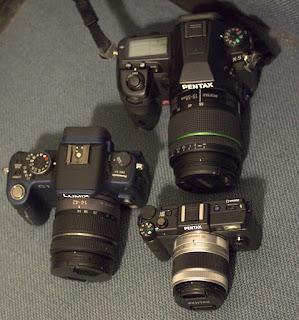 So here are three cameras with different sensor sizes, and the zoom lens that covers wide to light telephoto work.

If you like headaches, here goes: each sensor sees its lens as if it were a 35mm film camera with a 28-80mm zoom lens attached.  The Q lens is f/2.8-4.5 while the others are f/3.5-5.6, so it sounds brighter - but wait, formulae available on the web can 'prove' that the equivalence is actually much closer, and it can be clearly demonstrated that ... [enough: where's my ibuprofen bottle?]

Whatever.  Three cameras that can do very good things up to the limits that each sensor imposes, or that physics imposes upon them.  Larger is better for the sensor, smaller is best for most camera users, and the compromises each company makes will bring different opinions into play.  No reason to get a headache, really!

This is a gathering and a farewell party, as the blue Lumix G1 will be going up for sale.  With the Q's arrival it will become our "talented smaller-sensor" camera, and we will become an all-Pentax family.  This was shot with the K-01, so the Pentax Trifecta is in place.  If I become royalty I can afford the 645D and acquire the Royal Flush, but not before.

The micro-4/3 format is quite versatile and has many things going for it.  I won't bash the G1, especially as it was the first of its m4/3 kind and still serves many people very well.  We needed our small cameras to be really really small - so the Q will serve us better.

Somehow, I'm not.  Another camera is on the way.

I recently despaired of getting another camera for my wife, despite my certainty that a yellow K-01 would prove irresistible.  We have similar Lumix G1s so that would be the vehicle that allows us to shoot 'identical' images, so she would learn to see what I see on the same subject.  The G1 is a great camera with some nice features, and it's an ideal learning tool, but my wife's health is such that even micro-43 is pretty bulky for her use. 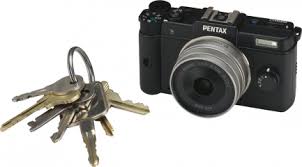 As Pentax did with the K-01, they now do with the Q - drop the price to a fraction of its original MSRP and watch them vanish.  The K-01 cured me of new cameras... but I failed to account for the cuteness factor as applied to my wife.  She found it absurdly cute and small and felt that the sub-$200 price was worth a dent in our budget.  Saying this actually meant a sub-$400 price as she still wants us to have identical cameras to shorten her learning curve - so here we go, again.  The sale includes the standard zoom lens of about 28-85mm so it is not shown in the image above (that's the prime lens).  Still let's face it, this is a really small camera!

Talented too, by the way.  Its backlit 12Mpx sensor can do quite well to iso1600 or a bit more, and it has raw abilities for personalized processing for sharpness, noise and everything (unlike jpg with its fine but compressed images that don't decompress the same twice).  I really liked the Fuji F550 (until it hit the pavement, hard) for its 1/2" sensor with raw shooting, so part of this will be familiar to me.  Many things, actually - the menu system is almost a mirror copy of the larger Pentaxi in my collection, so my learning curve will likely be quite short!

So the Pentax Trifecta is complete - do not hold your breath for the Grand Slam, as the $10k± 645D will not be in my financial league for the foreseeable future.  Plus it's kinda big.

Oh hey, did I mention the adapter to allow K-mount lenses to work with the Q?
That DA40 pancake lens just mutated into a 230mm telephoto... so they tell me.