the gear list, part XVII, give or take X

As 2013 approaches (and the Mayan calendar panic recedes!) the gear list has earned another entry in the 'blog.  Much gear has been sacrificed for Limited primes and the K-01 bargain, but what remains is truly good stuff.  I can look back and miss a few items that have left the list, but overall regrets are few. For example, the K-01 and its focus peaking would have rendered the 50mm f/1.4 Sears lens much more usable - but the DA40 Limited that has taken its range is far too good for any regrets!

Compared to earlier times, that's not many lenses - but it's more than I can use at any one event that's certain.  Most events can go with perhaps two primes and a zoom, and seldom would more than four go anywhere with me.  A very comfortable kit.

Micro four-thirds:
On the non-Pentax side, we own two Lumix G1 cameras, two 14-42 OIS kit lenses and a 45-200 OIS zoom to share.  My wife really wants to learn about imaging, and having identically-spec'd cameras was how she wanted to learn.  These are decently talented micro/43 cameras with electronic viewfinders and flip screens, so very versatile.  I also have a basic adapter to allow the K-mount lenses with aperture rings to work as well, though no stabilization in that case.  I must try the 400mm Hanimar on the G1 soon!!

Software:
I now own Elements 10 and Premiere 10, having upgraded from 9.  Not usually worth taking a single step up, but I didn't have Premiere before this, and the package price was very good - and since I now have the K-01 I might do some video work.  Some day.
Plugins for the above include NeatImage for noise reduction, SmartCurve for lighting adjustments and ReDynamix for gentle redistribution of dynamic lighting without all the HDR effort. I also use Picasa software for the easy changes and quick text additions.  That'll do for now. 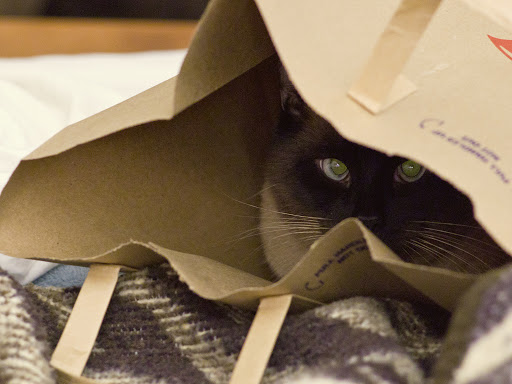 This was processed from DNG in Elements 9.  ISO6400, 1/6s at f/3.5, manually focused until whiskers glowed with focus peaking.  The camera was set to -0.7EV so I boosted the light a bit, but not too much!  Also removed color noise but luminance NR is set to zero; also removed a slight magenta color cast.  Given 1/6 second exposure this is mighty good, and the small amount of processing at iso6400 speaks volumes about the sensor & internal circuitry in the K-01.  The lens cannot help but impress too; wish I'd gone to f/2.8 for this.

Oh yeah: I'm happy with this!