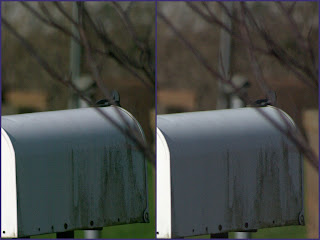 I tried to force the two Lumices to show me their worst today: RAW mode & underexposed to show me grain and banding. They obliged well enough, with the G1 showing enough red chroma noise to unbalance the image slightly to the warm side. The GH1 was more color-neutral, but stronger banding is apparent on the shady side of the mailbox. In either case the jpg images were nice and clean, and a moment's PP would make the RAW images better. 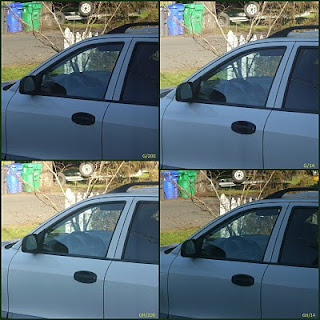 Inconclusive. All gear is more than good enough, and even iso2500 shots look fine with 2-3 minutes of work. Shots proving I did something are at the Picasa page.

I took my K-7 and the 18-135 to the office, hoping for better tests on that combo. It was another grey day, less fog but dense high clouds. I broke out the camera just before lunch, and found the SD card was still in the computer at home. That hurt, but then I remembered the little pouch with spare 4GB Lexar cards in my pack: hooray!
They were not there.
Pouch yes, but no chips.
It will be most interesting to learn which parallel universe those dropped into, as their sole purpose in life was to cover my .. tracks when this sort of thing happens. So no tests & a more relaxing lunchtime, at which I sent away the Rikenon 135mm lens. Time to trim the collection a bit as I decide what system fits me best.

Although the purpose of interchangeable-lens cameras is best fulfilled by occasionally changing the lens, I find that it’s nice to have one lens that will serve for around 80 percent of my shots. The DA16-45 is an excellent lens, but stopping at 45mm made it about a 50% lens for me, and the 55-300 although wonderful was even less in demand. I picked up a 50-200WR a few months back, and despite its cramped range and lesser sharpness (relative to the 55-300, in most opinions) I found it suited me better. It's small and light, give me more consistently smooth bokeh... and stopping at 200mm keeps me from venturing beyond SR's ability to combat motion blur when I play in faint light. I had picked up an 18-55WR for its weather properties, but its range was not much wider than the 16-45, it's inherently slower in most of its range, and its imaging qualities are less highly praised by most users.


What did I gain?

And what did I lose?

The 18-135WR arrived late on the 9th of February. Wow, what a small package! Compared to the 50-200WR, it is similar in length. The 18-135 is much thicker, using 62mm filters instead of 49mm; the new lens is fairly small but dense. It was getting dim outside so I got in a few snaps, which showed the promise this lens brings: a slight whoosh and it snaps into focus. Given the fairly silent shutter of the K-7, the package is impressively easy on the ears. 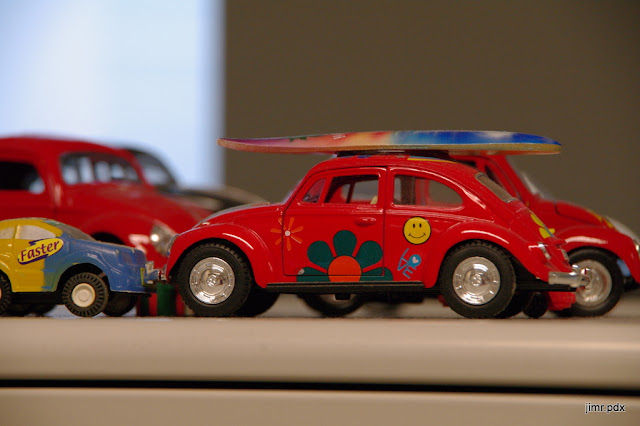 I know nothing of DA* lenses - they are the top dogs in the Pentax lineup, weather resistant, often f/2.8 and with SDM motors. They are large, heavy and expensive: three strikes so out of my lineup (for those who need the light grasp and can afford them, I have no doubt of the lens' talents). Many have been ridiculed for SDM motor failures, especially the 16-50. I expect this is fifty lenses out of several thousand, but those with bad motors are loud on most forums - and several have had it happen more than once, which is more ominous still. I therefore venture into motorized lenses with some trepidation, but hopefully the DC system is SDM with a few issues resolved in advance. I'll keep the receipt handy and register soon though.

Like every DA lens I've owned, this one comes with a hood. Not merely a hood but one with a slide-out partition so you can turn a polarizing filter with the hood attached. You can lose the slide-out part though, so some care is needed. The slide is at the bottom of the hood in landscape mode, so if holding the camera vertically the shade loses a bit of effectiveness if you hand isn't covering the small gap. The lens focuses internally so no realignment is needed due to focus. This is the first lens I know of that has the focus ring close to the camera mount, so at some point I'm bound to be confused; I have not run into that yet as an issue. All DA lenses can be manually focused while AF(s) is engaged - if you can find the ring. (Note that DAL lenses are the exception to these DA-specific details: the bargains of the Pentax line, these have plastic mounts, no hoods and no 'quick-shift' manual focus override.)

I was preoccupied when the last of the GH1 cameras were dispersed on Panasonic websites. I joined Club Panasonic, I visited their Facebook page - but none of the options I tried led to the $375± camera/lens deal. I could not determine if I qualified for the EPP specials. And since I was working hard on other matters at the time I let it go, presuming that a few of the purchasers would turn the cameras around for a small fast profit.

Well, one came up & I took it - so more tests are coming soon as the G1 and GH1 square off. Very similar cameras in function, the GH1 seems to have a different 'eyebrow' to accommodate the video microphones. The big deal is the sensor though, which outputs similar 12mpx images but scores higher by a decent margin in most tests. The dxomark site shows the GH1 sensor to be a notable improvement on G1 and K-7 scores in most respects, and review sites are quite positive on the new sensor. We shall see about that, and what technical tests show compared to what I actually shoot.

It seems the body I bought is among the very last, according to the serial number. Many GH1 owners prefer cams with the older firmware which could be 'hacked' to provide video specs that sounded better - again, whether that results in images that are substantially better is not entirely clear. I read a few private blogs which showed before/after, and concluded that a small improvement was visible for those who know what to look for. I'm seeking the best bargain stills though, so lack of hacking will not trouble me unduly.. and of course, the GH1 video is far superior to the G1 since it had no video abilities at all. Good enough for me!

I've cleared the shelf a bit (and thinned my wallet) by trading three DA lenses for the new 18-135WR. Reviews indicate it's at least as good as the 18-55 plus is weather sealed - so off go the 16-45 and new 18-55 along with a little-used 55-300. This idea was contemplated earlier, but I feel the Pentax side of things has been neglected; this might help me decide whether my future is Pentax or elsewhere. I still have the 50-200 for longer reach, and perhaps some day either a 10-17 fisheye or their magical 15mm Limited will appear in my collection.

On the m4:3 side I picked up a great deal on the Olympus 40-150. This is small compared to the 45-200 but will not be stabilized on my G1 - so fair weather only. Initial tests are as expected: great optics, easy to carry, a risk of motion blur if I'm not careful.