This time it's the USPS delivery service hopscotching from Washington to central California to deliver a package to Portland. How is this a sensible thing to do??

macro lenses are nice.. but!

This image is in fact from my Rikenon 28mm lens near its min focus of 11 inches and shot at f/5.6. 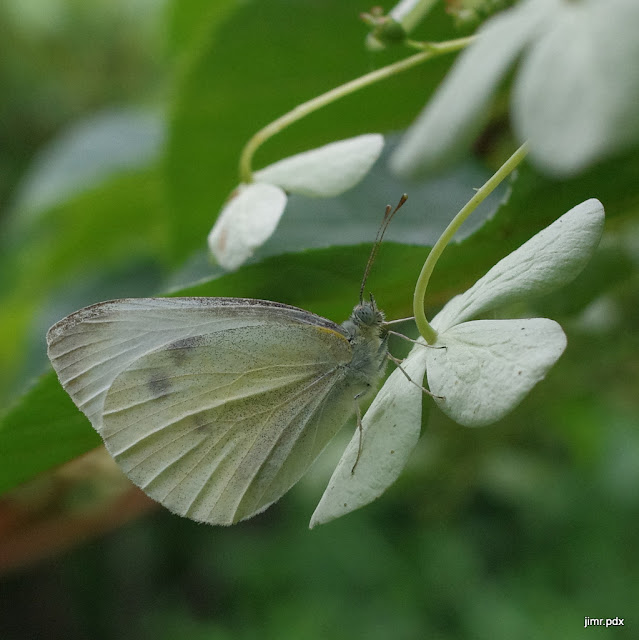 Yes it's heavily cropped - but I cannot find any great fault with that as I'm not about to print a poster of this.  Remember when you hear complaints about how 50mm and 35mm macro lenses make you frighten away bugs: cropping can be a good friend.  I went inside and grabbed my Sigma 50 macro, but really could not get much closer in any case.  I could crop it a bit less to get slightly better results, but the great shot with the 28mm is a better story to share. Macro-like images from a $35 lens and no screw-on 'macro filter' works for me!

As I noted in a recent post, the lens set that I have is quite excellent and satisfactory. I still place low bids now and then, and to my surprise I won a 100-300 Quantaray. It is a clone of an earlier Sigma that I had, and it rivals the Pentax DA55-300 but with lower contrast and f/6.7 above 220mm; it's full-frame friendly and has an aperture ring, so it has uses with film bodies and great potential if Pentax takes the hint and releases a FF 36x24-sensor camera. Until such moments arise it really has no great use to me, but it is a bit more compact and focuses faster than the 55-300. I guess lower bids are in order though! One can make a nice pairing of the 28-105 and 100-300, but neither of those lenses are kept in immediate reach very often - I guess "top-shelf" optics means that I put them further out of reach, so it's not the compliment that the label suggests. Another addition is on its way, and again it's an old favorite: the SMC-M 200mm f/4. Since the 70-150 was my highest focal length in manual-focus gear, this was a nice (re)addition; I can now use 28, 70-150 and 200 manual-focus lenses to make a nice primal set. To round it out, AF primes at 15 and 50mm and the SMC-M 135/3.5 (also on the top shelf) can be added.

After waiting and watching for several days, my last-ever cell phone (probably) reached Troutdale, about 10 miles from my house.  I came home from work expecting to see it on the porch - instead it had traveled 150 miles to a processing facility. 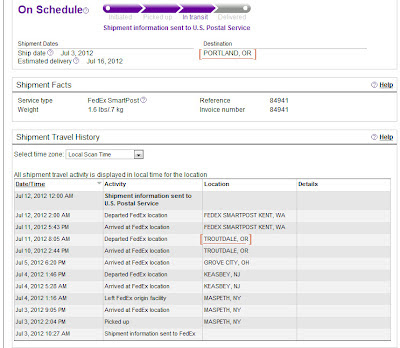 I swear you can't make stuff like this up.  If it went by road it may have passed within 1/4 mile of my home on its way out of state.  And my protest note received a simple form letter, stating that all is on schedule.  Nobody at fedex can actually look at a map and see how stupid and wasteful this process has become?  Corporate knows best.  Idiots.

I had always wanted to see a backpacking map and my home town set to the same scale. 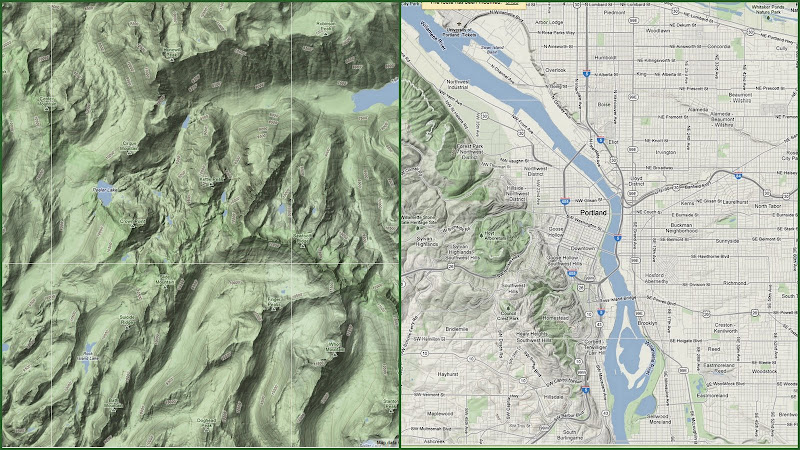 It's amazing what a bit of elevation, topography and solitude (not to mention the pack weight!) can do to make distance scales change.  The Sierra sample is the neighborhood that we backpacked in 2009, so I can envision a few of our camps and remember the effort.  The rewards for that effort were spectacular.  I've walked home from downtown before, and it's charming in its own way to see the homes and yards - and the (paved) routes too numerous to count.  Similar yet incomparable.

And now I know.