moving on II: the New Place

We are now quite certain of where our selves and stored things are going next.  Just when it will happen isn't clear yet but it will come soon.  It's a bit remote, meaning wildlife and stars will be more visible.  It has much more storage, hooray!  And the floor-plan suits us both very well.  Also important is the budget impact, which is not what we had originally planned but still very very good.

For photography it will be a big change from big-city shots that have dominated my recent days and years.  We will have more birds to help me test the recently-acquired 300mm Takumar - including Swainson's Thrush, the bird at right caught in my simple 5Mpxl Casio back in '07.  This is Lórien's favorite bird and its song was clearly heard when we first toured the New Place.   Hopefully the finches and robins will still find us, and many hummingbirds - but the abundant crows can remain in Portland, thank you.

We will definitely be looking at new landscapes in all directions, with Mt St Helens now closer than Mt Hood.  It will all take a while to get used to, that is certain - including a new task, chopping wood for our woodstove.

This change comes with an attempted promise of no new gear as a reward... at least not for a couple more months when rainy season resumes.  That's OK though, as I have rewarded myself enough lately despite the tight budget :-o

As noted elsewhere a weather resistant lens is my next good idea - actually the New Place should be wetter than Portland, making WR more than just a good idea!  Once I unpack I will find several lenses that were supplanted in my lineup, so at least one of the next lenses will be self financed.  That's always nice! :^)

I have owned several lenses more than once (18-55s 16-45s, 18-135... yes nearly every kit-like thing).  This has happened for a very good reason - every single time it's been a good one though slightly different each time.  Well so it's an excuse/reason, call it what you will - but here goes.  Pick the word that best suits your reading, and enjoy!

Jim's Law of Gear Obtainence (LoGO):
Each new lens is bought to meet a want/need, and that is very much based on what other lenses you own that don't quite do the job/lust-slaking.  That's what keeps a kit alive/healthy/expensive!  And of course, filling that empty/imaginary hole in the kit redefines the next want/need, and the cycle repeats again/endlessly/until you check into rehab.

Financial pressure may create/justify a need to sell a few lenses, so after examining/drawing straws regarding what's in the bag, the shooter choose what gets less use/love/good reviews and carefully/recklessly lets a few go.  And yet again the cycle repeats.

So what has me in such a reflective/silly mood (hey stop that!) today?  It's due to my repurchase of the DA40 Limited.  Yes I owned this before and really liked it, then went all-in on zooms like the Tamron 28-75 that was just as fast but more versatile, then went to all-manual primes.  But clearly there was this gaping hole between 24 and 50mm and by the LoGO I had to... (hey stop that!)

At one point I also owned the DA40 XS lens, which is cuter and tinier (well, not cuter as such) than the Limited.  The quick-shift clutch is a nice feature though, so the Limited is a better choice for me because... OK spill it: I found a used Limited 40 for $229 online, and that was irresistible.  There: I said it, and I am feeling much better now!

My other amazingly good reason is that I own a prime lens from every Pentax manual-focus lens series (Tak, SMC-M, SMC-A) but not a Limited, which focuses manually/any time I want even when in autofocus mode.  So it had to be in my kit!  That and it's tiny & cute (less and more so respectively than the XS).


Oh wait I forgot the best reason/excuse of all!  I own the Limited-lens version of PentaxForums' 2013 t-shirt (the middle one but in white), and I don't want to give it back - so I must own a matching Limited.  So it's a matter of use it (lens) or lose it (shirt) more or less, as it were.  Although to be entirely correct I believe that's a DA70 focus scale on the shirt... maybe next time?

Now that the pressure of moving is almost over, I can consider the single missing item in my bag: a WR lens to let me play in any weather.  I currently see four options in the range I am seeking, plus one more long option.  Several of these have been tried, and they moved on for one good reason or another.

The first two should just be removed from this list, as I keep selling them.  The 18-250 zoom covers both their ranges anyway and it can handle a little moisture now and then.  Thing is it also covers the 55-300's range pretty well!

So that leaves the big two: DA* and Limited.
The 16-50 could crowd the 17 fisheye a bit, which would be sad, but for hiking it's a solid though heavy choice along with the 105mm Takumar or perhaps an 85mm lens to be found later.  For hiking light the 20-40 is a very good choice, does not crowd the fisheye and opens up space for
primes like the 50/2.8 macro.  The DC motor of the 20-40 has shown itself to be durable, though the SDM on the 16-50 can be overridden with the screw drive inside the camera (farewell silence, but hello certainty).

And of course, Pentax is bound to seal a prime lens one of these days... right?
I live in interesting times :^)

In both good and  bad news, the house has sold!  This means debts are nearly gone and our scattered boxes of lifestyle will be regathered soon in one place.  It also means we must figure out where that New Place actually is, and soon!

Tours of our next possible home have been ongoing, and for the most part the 17mm Fish-Eye has overtaken the 18-250 as the most-useful lens for such matters.  I did not expect to use the superduperzoom over 50mm often for this task, but 18mm isn't quite enough either.  Since the Fish-Eye shoots with distortion allowed its horizontal field is wider, a bit wider than the DA15 - so that's wide enough for me, and while the distortion is clear in many cases it doesn't distract me from what I want to see with these images.  If anything it's rather cool!  And as the shot here shows, the color & contrast are quite excellent.  This house this was shot from wouldn't take a contingency offer on a sure-thing sale - too bad for them.

Of course, one of those packed boxes scattered to the four winds holds an 8mm Rokinon fisheye,
something I was sure I wouldn't be needing before the move - and really I still think the 17mm is better for home scrutiny as the 8mm would make details too small to get more than a general sense of how these prospective homes look.  As I've noted before, I believe the SMC 17 has effectively removed the Rok 8 as my widest lens, or the lens that will get enough use to justify its place in the bag.  Someone else can enjoy it soon.  The same could be said of another box, which holds K-01 and K-5 bodies that have been benched during the move and now find themselves less valued.  I really should have seen that coming...

The DA18-135wr is a lens with its own polarizing filter built in! 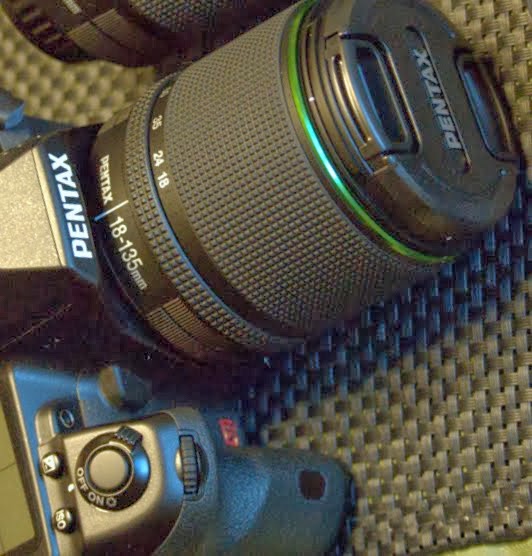 No not as it pertains to light, but as a conversation piece.  Most owners think very well of it, and its specs hold great appeal: the first silent DC motor has held up well compared to the perceived woes of its SDM sibling, its weather resistance and range are great to carry as a single unit.  WR does not just work in foul weather, but in many other times when switching lenses isn't a great idea (think dust and sand not just rain-drops).  At the same time, most people point out edge softness as the price of a super-zoom lens, and chromatic fringing as easy to correct with either in-camera or on-computer processing.

All points are fair, and each owner needs to evaluate what it takes to make a lens do well enough for their needs.  I have tried three of the 18-135s and it doesn't work for me.  I sold my most-recent copy and picked up a Sigma 18-250mm the same afternoon, and put some money in the bank (aka 'lens fund').  The compromises required for this lens fit me better, and it's that simple.

What does the Sigma do better?  Well it has more range, clearly enough, and the f/6.3 penalty kicks in right about where the 18-135 stops so fair is fair.  I haven't really tested it explicitly at 135mm but I have the strong feeling it works better than the Pentax lens there.  Why?  Because it outperforms the Pentax at higher focal lengths for color fringing, showing essentially none in spots where the DA lens showed quite a lot.  I am not a fan of correcting lenses within the camera, which made my time with micro-43 gear trying too.  The Pentax K-5 series exacts a time penalty for correcting fringing and distortion at the time of shooting, that's mostly what I dislike.  Both my early Sigma 18-200mm and this 18-250 do not need fringing correction to speak of at any time - sure it can be done and improve things, but only when peeking at a higher level that I enjoy peeking.  Again, it's that simple to me.

I will post some teeny images here to show what I mean, but click 'em to see things better.
The dreaded telephone pole/wire shot with +EV correction always outs bad fringers and the Sigma barely flinched at 250mm wide open, which beat the 18-135mm by 160mm± in my experience.  Yes I've lost out on weather resistance, but the Sigma has its HSM motor that is nearly as fast to lock focus (not quite though) and is equally silent.  OK I lost quick-shift manual focus too, and that's a bummer though not as huge as I keep telling myself it should be.  I can definitely detect fringing near the corners, and if I get worked up enough about it I can push a button on my computer.  I probably won't but I can!

And lest we forget, the Sigma can do closeups to 1:2.5, almost half life-size.  I tested it against my Pentax A50/2.8 macro and 1:2.5 is a very good match for scale, but let's be clear the macro prime impressively outscores the superzoom.  When closeups matter the 50 must come along, but when it's incidental to the shooting this zoom will serve well enough in good light.  Funny thing about closeup ratings, Sigma always underrates their zooms: from the 17-70 to the old 18-200 to this one, I can always squeeze out a closer closeup than they claim.  How nice!