Something about the 18-55wr keeps calling me back - I've had two now. It's the overall package that's hard to ignore: really light weight, quick shift, weather seals (even if the k-x has none it's reassuring) and quite good image quality. Also takes smaller filters than lenses that try to replace it; when matched up to my 50-200wr with a 49/52mm step ring, one set of 52mm filters can do it all!

Something about the 16-45 keeps calling me back - I've had two now (boy that sounds familiar..). It's bright at f/4 through its range, fairly light weight, and its 16mm f/4 setting keeps me from spending all my cash on the 15 Limited :^) It also has quick shift, which I find quite handy. Color and contrast are very good, and the latest one was well treated and at an excellent price. Part of its issue before was that I was trying to go with 16-45 and 55-300, and that gap sounds small but seemed to be something I need. I've closed a part of that gap with the 50-200, and I will just crop as needed (or maybe that 18-200 Sigma will be attached to the camera that day?). I feel better about this lens now that I've tried so many alternatives, and for outdoor/mountain scenery I feel the wider range will be valuable. Again: we shall see..

What I liked about my three Sigmas, and why they could be expendable.

The 17-70 is a great do-it-all lens: very good focal range, decently bright, good sharpness and bokeh, and extremely good at close focus. I have already let this go though.. what happened? Well, it's a bit heavier on the k-x than I liked (I am an admitted weight weenie), and the 16-45 is cramped in focal length but goes a smidge wider and focuses nearly as close. I perfer the color and contrast a bit more on the DA lens, and the quick shift is something I missed. And this is one of those Sigmas that zoom in the other direction relative to most other models; of course the DA16-45 extends the opposite of others' so this is a relatively small knock. Other than not going out to 70mm, the DA16-45 is just more matched to my needs, it seems.

The 18-200 is another reverse-spin zoom, but boy does it have range. Think of it as an 18-170 f/3.5-5.6 and you'll see why the kit zoom moved on despite the quick-shift and light weight. My 18-200 weighs in under 400g and is good with sharpness and bokeh. Its downfall is that Pentax reports all over 170mm as f/6.7, even worse than the stated 6.3 (splitting hairs here though). It may stick around as the ideal quick-snap option though, the one lens to carry when you are not out to do imaging but just capturing opportunities. It could use a bit of PP to really sharpen up relative to the Pentax lenses I have (16-45, 50-200wr). And when focusing close with the 18-200 (which it does well) the effective FL up close is more like 170 than 200 fully extended. All hi-range zooms do this though, one of the 'compromises' that these lenses inflict on users. We'll see if it stays around..

The 18-50 f/2.8-4.5 is a new and curious lens. The price is quite nice, it does not change size while zooming or focusing, focus is nearly silent, and it's mighty fast. It's only f/4.5 from about 45-50mm so it isn't one to go faint quickly, another positive. It also has stabilized optics, which Pentax users don't need but my tests suggest it does a slightly better job than SR in low light. As an indoor lens it would beat out the 16-45 for silence and brightness is used wide open.. but that isn't a common use for me. Its close-focus talents are not close to the 16-45, and its range is more cramped. Sounde like this one will not be staying.

I've caught a few amazing deals recently online and at auction, which allowed me to try out several wide to mid-tele zooms on my k-x. I had not intended to do this, but fell victim to the proverbial offers that I could not refuse! Let me retrace my steps:

When one is on a Limited (big-L) budget in the world of Pentax, it's a wonderful thing. Their Limited series of primes garner high praise from all, but the price of admission is far too steep for me right now. I'm on a (lower-case) limited budget, so prime lenses come from past eras or new designs for thinner wallets. Right now that means the Pentax DA35mm f/2.4, which I picked up for less than its common $200-ish going rate. A very nice lens, light and compact, it fits nicely between my Chinon 28/2.8 and Rikenon 50/2.0 bargains. Today came another piece of the puzzle, a 100mm f/2.8 SMC-M macro. By itself it stops at 1/2 life size, but its reputation for close and distant shots is very good. The folks at keh.com put this in their 'Bargain' class but other than a somewhat tight focus ring it's in amazing condition. It fits between the 50mm and the SMC-M 135/3.5 that was also available at a fine price on auction.

My current problem in the Pentax mount is a complete lack of a bargain 24mm lens. Vivitar made some 24s but their rarity keeps prices up, and Pentax models are quite expensive. I'd rather have a 24mm than my 28, it fits better with the 35 and 50 as far as spacing.. oh well. Something between 50 and 100 would also be fine, but most 85mm lenses are not all that cheap either. I have no great rush on this plan, having a few good zooms that will usually be along - and until the budget can expand I may be done for a while.

The 'thrill of the hunt' is in play for PK primes!

How curious - two years ago I had the difficult choice of Sigma's 17-70 or 18-200 to take backpacking with my Sony A200. Now several bodies and one brand switch later, I've won back both these lenses in PK mount! I knew I liked them before, guess this proves it.

A curious thing about Pentax is that f/5.0 simply isn't an option in 'Av' mode; as I zoom at max. aperture with most lenses, they jump from f/4.5 to 5.6 at some point. Now I learn that they also don't "do" f/6.3 as above 175mm this becomes f/6.7 according to the camera. More tests are needed to see how this lens does, but it's great having a 400g lens that can do so much! Its closest focus is .30x, bokeh looks fine at first blush.. sharpness tests still to come.

Shooting in M mode is still rare for me, so I screw up with some regularity. I recently sold two 50mm lenses and kept my original Rikenon f/2.0, so I was getting reacquainted with it when this happened. Iso400, previous shot clearly taken in strong light. And below it is the reprocessed shot in Elements 9. 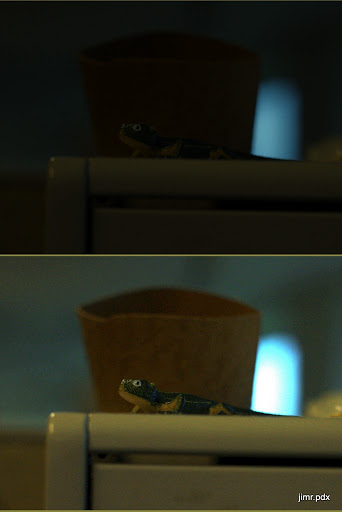 When I say 'reprocessed' I mean the Levels slider was moved to the left. That's it! No color adjustments, or noise reduction, or sharpening or anything else - just made it brighter. That's quite a nice result, reminiscent if not as capable as its elder 16-Mpixel sensor in the K-5. Look around the web to see how that can take a shot of a coal mine & make something of it! :^) Anyway, I'm more than pleased with the results of minimal processing on a poorly-executed image. And oh yes - this is a jpg image, not RAW with all its benefits.