I spent the weekend staring at my G85, trying to wrap my head around its complexity and finding a setup that makes sense to me.

This camera is the G7 all over again - a camera that fits great in my hand and meets needs I plan to have but don't yet. Because of that I find myself tripping over bonus features while trying to make it work like I want. How's this: click the Fn button near the shutter for EV± then turn the Front dial. No not the rear one, the one right next to the button - the one that just moved away from the shutter. Give up and do a search on the virtual manual again, I guess.

The G85 can do amazing 4k video and 4k photo tricks. The M1 can also do 4k, has a 'better' sensor and USB charging. the EP5 can do Live Time which I plan to make use of.. some day or night. Each of these benefits comes with a lack or a level of complexity that causes me grief.

So why am I doing this? How did I get here?

As I indicated earlier this year, I made the decision to pare down the camera gear to a single system - possibly just one camera. Since my wife's camera is a Lumix GF2 it was the best decision overall to go with a modern, weather-tolerant G85 camera with the 12-60 kit lens and let the equally sealed Pentax system go. This week I finally took inventory, took photos and posted a 4SALE sign on the internet.

It's not just Pentax leaving though, as I have a surplus of µ43 cameras too. The YI∙M1, GX1 and EP5 cameras are superfluous with the G85 in hand. If most other gear goes my hope is to hold on to the EP5 for its small, feature-dense specs and Live Time astroimaging capability, plus perhaps the Pentax 70/2.4 Limited for use on the µ43 bodies. 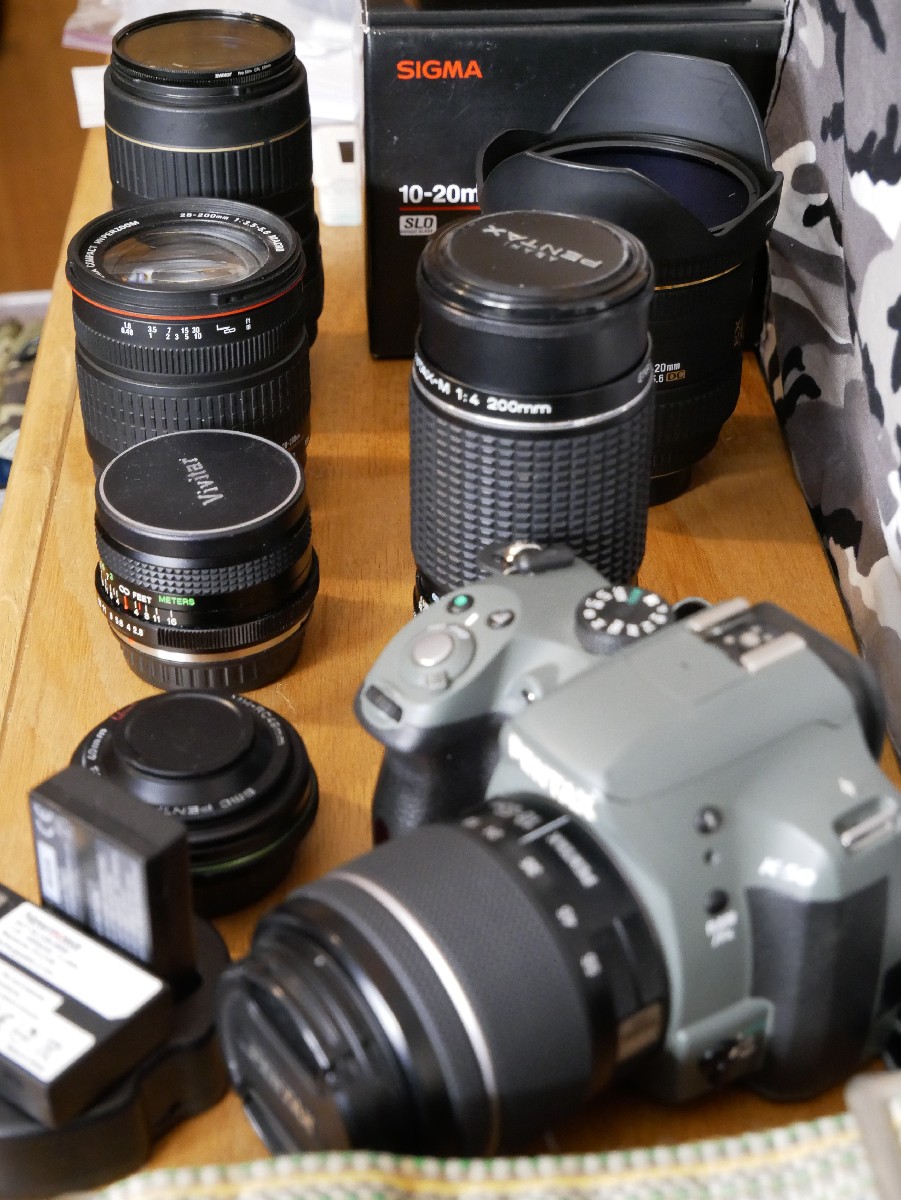 In fact the Pentax system is better equipped, with lenses ranging from the 10-20mm Sigma to a 100-300 Sigma; the full range would be 15-450mm/e with 27-80mm weather sealed. I've used Pentax for years and both know its interface and like its output - but some things are simply not in Pentax DNA and cannot be expected in the near future.  I'll miss the green button, post-shot raw saving and other cool things that make them unique.

Going with Lumix meant fewer native lenses in hand but more modern functionality. The G85 is similarly sealed for foul weather and has internal stabilization; it also has a way to use the in-lens system to boost stabilization further, and has used its video expertise to branch into both high-spec 4k video and the technique of using 4k video frames to extract an 8Mpixel image in ways Pentax won't attempt to imitate any time soon. And my lens collection isn't bad: two lens provide me with 24-300mm/e coverage (24-120 sealed) - and the adapted 4Thirds lenses add 1:1 macro and 150-600mm telephoto as well!

This decision wasn't easy - but it's done.
OK not until these things sell, but nearly so.

- - - -
3/18 the doing is happening and three lenses are ready to ship off.
The paypal balance dropped a bit as I chose to grab a Lumix 20/1.7 for the new, smaller kit. The original plan was to dump my last unsold gear and swap for one, but this is faster - and hopefully will be a wash financially. This sets me up with 14, 20, 35 and 45-150 when the 12-60 isn't practical (that sounds like a rare event, but low-light things happen!). The 25mm fit better with 14 and 35, but those lenses are either knockoffs or a bit large compared to the revered 20mm, so I'll be OK with my gaps as they stand.