Now that I've owned pretty much every sub-$400 lens at least once :-) I am forced to conclude that the gear needs revamping.  Oh yes, this is something I have a lot of experience in - but hopefully the learning process has allowed a few lessons to sink in.

Many ways can make sense with a set of lenses, and often one calls one lens 'ideal' then builds an imperfect kit around it. My problem comes from trying to solve simultaneous equations with a few variables left unsolved.   I want weather-resistant lenses that all take the same filter size, are small and light and with the best IQ available for under $400 .. well, that really won't do, it's just too much to ask.  Let's whittle it down a bit.

My current prime setup has been all-manual (focus and aperture) with 28, 50 and 135mm covered.  I have owned more, including a 24mm and the DA 35/2.4, but I don't really use primes enough to keep a bunch of them around.  A major gap in the 80-100mm range has been troublesome, but that's macro territory and therefore beyond my budget - yet somehow a Tamron SP 90mm f/2.8 fell through the auction system and into my lap. This non-Di model is one generation back from brand new - so now my primes are joined by one of the best lenses ever made. Maybe that's hyperbole, but the dyxum site (Minolta) rates it 4.8/5 and Pentax owners go 9.2/10 - so maybe it's real.  My tests show it to be most impressive and likely my best current lens & perhaps best ever.
Late addition - found a DA 35/2.4 at Amazon, so my prime kit is becoming more automatic & less manual.  At just over $150 this lens is easily worth having, even at the expense of the faster 50mm Rikenon.  This deal puts a few other primes on the block.


* The K200d is my tool of choice, but finances may be freeing up a bit for a lunge at the K-5 during its temporary (?) price drop.  That would require very good optics to do its best.. and now I have some that easily qualify. On the other hand the k-r is about to be replaced, and if Ricoh/Pentax design a midrange WR body with the 12M- or 16M-pixel Sony sensor that will be worthy of my attention.

Personally, I have never given HDR much thought.  Like so many computer enhancements, it was often overdone and very unnatural.  I even disliked HDR as a term, since many times no true black remained - it was a skewed DR that made everything bright but nothing really dark, quite unlike the world I live on.
Recently I saw some images more to my liking and decided to look into it a bit more.  I picked out a raw image that I had tweaked to my satisfaction, showing Mts. Rainier and St.Helens from north Portland (yes, Rainier is that big!).  This was an alpenglow image at high FL on my F550exr.  I then gave it a quick dash through a PS-Elements plugin called ReDynamix, which is fast and came with a free-trial mode. 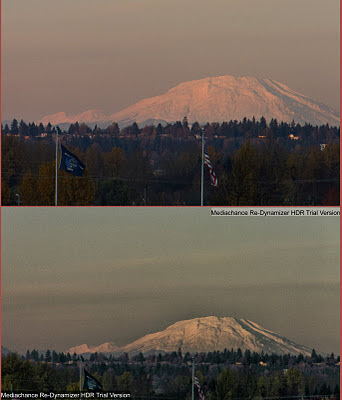 This was produced quite swiftly.. a bit too swiftly, as I can see issues that show I was a little rushed.  I took the sunset colors away without meaning to, and magenta-tinted trees doesn't come across as realistic.. but not as bad as I often think of when HDR comes up.  So the result of this first test, while not quite right as a finished product, is quite satisfactory.  Guess I'll pay the price for that plugin, which right now is .. wow, a mere $16 at http://www.mediachance.com/plugins/redynamix.html 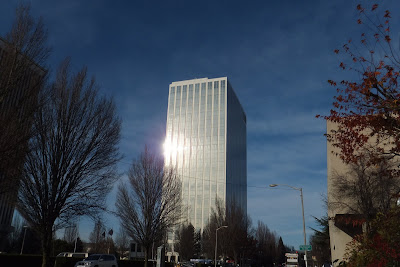 A simple test of whether a camera 'works' for you is to count the surprises, and see if the good ones outnumber the bad ones. Here is a case where I fully expected a fairly well-exposed building and a lot of silhouettes - and I didn't get that. As far as metering goes the F550 did a very good job!  I was walking as I snapped this, so no points off for sharpness or composition this time :^)

Now on the other hand, you can see the oft-reviled lens' tendency to go kaleidoscopic - in this case it just seems to be a purplish halo, but in extreme cases it's made up of several colors. So while I will not claim this image is anything near perfect, I am more impressed than disappointed.

..so what about the Pentax kit?

Recent posts have been all about the F550, but the K200d is still around. My Pentax kit of the recent past has mutated faster than .. well no analogy comes to mind, it's been that bad. Why is that? Long story..

The past two years have seen great chaos in our personal life, and it's been reflected in my camera gear. In early 2010 my Sony A200 and some Minolta lenses ruled, and our health was under control. I switched over to Pentax as a trial run, picking up a refurb K100d - and I liked it. About a month later my dream camera, the K-7, went on sale for a record-low price (back in the cashback days of yore) - exit K100, enter K-7. About that time my bride started experiencing strange medical symptoms and visiting specialists, but things felt like they were under control. While that was going on, however, I was learning the K-7 was not a great fit for me; it's very much a right-eye camera and I've been a left-eye VF viewer since the mid-70s.

After Thanksgiving 2010, medical issues became a big thing - therefore medical bills did too. Given my ambivalence toward the K-7 and our tightening belt, I let it go along with several nice lenses and picked up a K200d. It worked very well for me, though its low-light limitations were apparent.  After a few months my wife's condition stabilized, which allowed me to look around for fresher options. At that point I found a barely-used k-x and grabbed it: farewell K200d (and strong weather resistance..).  In too short a time I found a great deal on the k-r; I let the k-x go, a move I would later regret as the k-x fit my hands a smidge better for equal image quality. Although I was limiting myself to $50 bids on auction sites (most of the time), it's amazing just how many lenses $50 could buy in a tight economy - so the lens collection got large rather swiftly.

Then the medical issues returned with a vengeance, demanding fresh budget cuts - so farewell to almost all my PK gear, and welcome back to another gently-used K200d and kit lenses. A couple of bargain primes and a Rikenon zoom remained, but the kit is much smaller. And that's where I stand today, waiting a clearer medical signal & keeping a low profile on auction sites.

I reluctantly stretched the budget a bit when I found the F550exr for $175, as I knew that was about $80 below its typical price. I even tried to cancel the order, but it came - and now I'm glad I have it. The budget flexed that far but no further. Maybe in six months the budget will allow me to dream again.. but maybe not.

As to my next Pentax?  Right now, that's a tough one. The obvious choice is the K-5, but my re-training to a right-eye shooter is still a work in progress. What I would choose above all is a weather-sealed k-x, or put another way a K200d with the 12Mpixel k-r sensor. Perhaps Ricoh/Pentax will choose to offer a sealed camera below the K-5, but I would not bet on that happening. Many Pentax users have asked for this (and a WR version of the 55-300!) but Hoya/Pentax was not interested. In the meantime the k200d will serve me well.

OK, today was push day, where I tried high ISO and other extreme shooting to push the F550 over the edge. I must say that, although the image below is blurred from slow shutter speed, the image itself is within my tolerance for iso3200 noise on a jpeg image. Going to 6400 shows some banding though, so (no surprise) that's a bad idea for a 1/2" sensor! Note that the bizarre mottled sky is in fact city-lit clouds with the first light of dawn behind them - so that's pretty much what the sky looked like at 6:40AM.

Even pushing up the fill light shows no banding on the iso3200 shots I took. I expect banding would show in underexposed images with fill light added - but it doesn't show if exposure is close. Since I don't delibereately underexpose high-iso shots and them boost them for shadow detail, this is not a deal breaker for me.  To stop at iso3200 and expose well is perfectly acceptable for a camera that I can pull from my pocket. If I ever feel the need to shoot that way, then I will need to find a different camera; my K200d dSLR isn't ideal for that either.

As to the zoom lens - many other web sites speak about its kaleidoscopic flare, and I'm able to reproduce that. It's not common on shots I took where I expected to produce it, so another not-so-big deal; I have images of twilit fields with lamps and they do not reveal it at reasonable exposure levels. Here it is - but this is cropped and fill light added to make it look its worst! 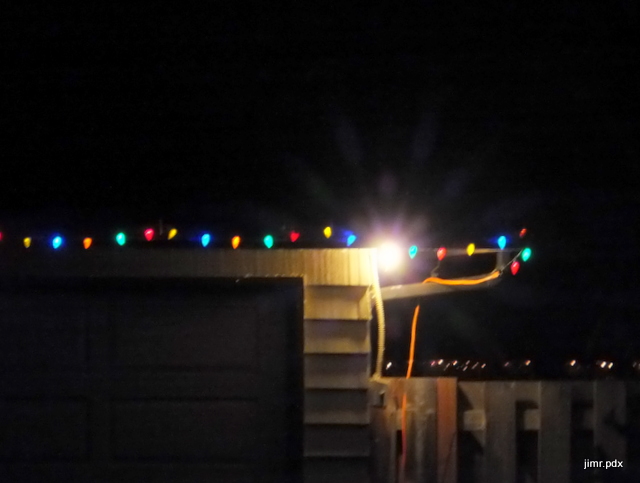 Here's another lens issue, a shot of the moon that shows some color fringing (especially the cyan on top). This is a huge crop of a bright object in a dark sky, so again not a shot I would choose this camera for most of the time. 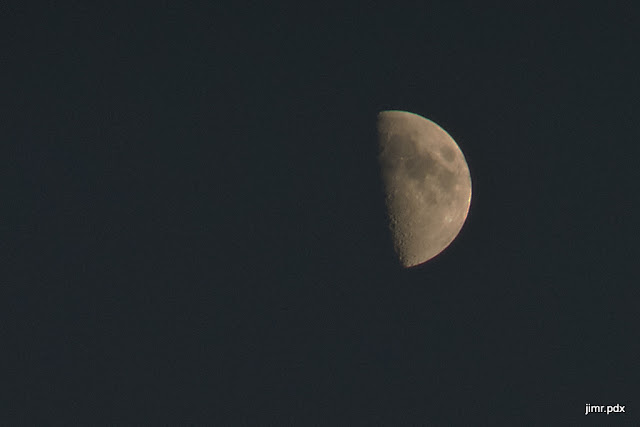 So the results are unsurprising, at least to me: this camera does typical shots extremely well, but can take 'bad' images if pushed too far or in difficult situations. Its iso noise is better than my 3-year-old K200d (with aps-c sensor) when shooting jpeg, which I find surprising and impressive. If I were holding a 2010-11 Pentax (either k-x, k-r or K-5) the contest would end in a hurry; I had under $200 to buy a camera part though, so those bodies are not avaible, nor is a fast Pentax-mount zoom. I feel that this was a very good imaging investment for where I am now, and for what I usually shoot. It's a keeper.