- back in my comfort zone with a Pentax camera. No surprise there, but the trip was a strange one; I’ve had no Pentax digital SLR for several months now, but many lenses remained that had near-zero resale value.

The pattern that caused this amount of turnover repeated often, sometimes in the same year. Assemble a good kit for decent prices, then sell it cheap and step up. Immediately encounter a financial issue that requires a selloff (other things too but mostly easily-moved camera gear). Pick up a consolation prize soon after for cheap and repeat the cycle. Occasionally alternate between Pentax and Panasonic, just in case.

Our finances have been seriously strained for a while, so two GX1 and kit lenses were all we could manage. As things began to look up at last, I looked over what was missing in my kit. The major point to me was weather seals; I recall worrying about the GX1 as it sat on a glove surrounded by a foot of snow as we cruised past it on saucers. I could do better, and either system could make it happen. How best to address that on a budget, given that I owned no sealed lenses?

My other issue to be addressed is the hidden electronic manipulation of 4Thirds images. I’ve learned to live with focus-by-wire, but when images are autocorrected for distortion and color fringing I get.. nervous. Those corrections are optional in Pentax bodies but only by developing micro43 raw files with ‘non-conforming’ software can I see the untouched image. Results are still good – but it still feels uncomfortable.

I searched optimistically for a K-s2 but the budget suggested a lower price would be best, so I settled for a lightly used olive-green K50 with repaired aperture-control part that is prone to fail on mid-tier Pentax bodies. The 18-55WR and body came to less than $250, which no µ43 body can match!

If I start looking to acquire a higher-spec body I hope I remember writing this!

Here's the latest olivine camera and its stylish '70s strap! 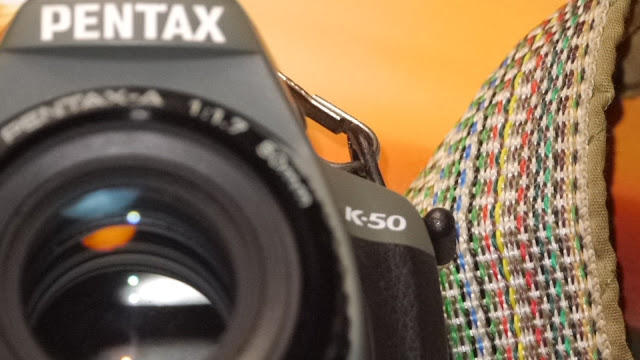