in praise of RESET

I had changed nearly every GX7 setting possible, and 'fixing' it was beyond my skill. Thankfully there's a menu setting just for times like this: RESET. It asks two questions, for basic and custom settings - I said Yes to both and the camera is back to its happy original self.


I can now dive back into my guide-books and menu settings and take my sweet time fiddling with things that really don't need my intervention. For example - I found the Q.Menu could be customized so I did that immediately, without any thought as to what had been set up automatically! This time I'll try what the GX7 offers first, then toy with it as seems best.

I shall need to reset my Custom C1-5 settings - but those were not as I thought I had set them in any case!

I downloaded an e-copy of David Thorpe's 'GX7 menus simplified' book. It definitely helps to have a translation of the Lumix system (any system, really - even for a US product) so with that in mind perhaps I'll walk myself into fewer times where the camera's actions completely mystify me!

I like my small primes.
The Oly 17/2.8 and Sigma 30 are both small f/2.8 lenses that do great work. Being f/2.8 keeps them small and I like it that way; the 12-60mm zoom can handle the tasks when versatility beats speed and best-possible image quality.

However.. the appeal of the newer Sigma 30/1.4 was beginning to get to me! Events that really could use faster glass have come and gone, forcing me into the higher reaches of ISO to pull off. The Sigma small-30 has been a great fit for many reasons, so seeing it under such pressure is sad - but it was a good candidate for replacement with a faster lens. The Sigma f/1.4 is still pretty new and in demand, so used deals are not likely at all - and it adds more cubic inches and 100g to the bulk of my kit. Not unreasonable, but still less convenient than the little f/2.8 version.

The pressure has now been relieved - but not in the way I had expected.

A couple of deals on used Lumix 20mm f/1.7 lenses appeared online, and I ordered one of those instead.
This is perhaps the original 'must-have' lens for the µ43 system, with compactness and great image quality offset only mildly by a 'slow' AF system. I've offered up a few other spare parts in exchange so the final expense for it should be quite small.

One of those 'spares' is the Olympus 17. I'd be very hard pressed to differentiate between times when the 17 or 20 would take precedence, so better to skip that part. Thankfully the odd 46mm filter size on the 20mm matches the Sigma 30 (and their 60/2.8 for that matter) so a new pile of filters will not be needed. And on the GX7 the little primes are stabilized!

I plan to seek out a Lumix 14/2.5 in the future* for wider shots. That one is another early model semi-fast pancake that I've owned before and felt good about. That leads to 14-20-30 and 45-150 for the tiny kit, with the 12-60 for handy wide zoom. Turning the 14mm vertically and stitching 2-3 images would cover to perhaps 9mm for those rare times when that would be of value.
Here's a 'blog post from someone who looks over the Lumix pancakes and has enjoyed them for a while!

* some slight risk that a fisheye will appear instead for the wider shots.. we shall see..

Our relationship with CenturyLink was strained big-time when our move was not handled properly. I sent them a note on their website that we were moving, but we still received a bill. Two calls and six months later we were finally disconnected - only to get a collections call several months later, and a ding on our credit just as our home loan closed. Strained indeed. 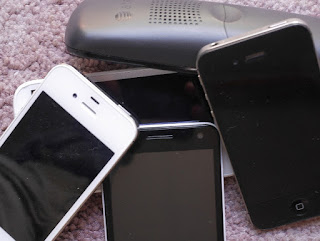 We've been using two cell phones plus a cell-based home number for a year or so.. but this past winter our signal has been really poor. To my chagrin we chose to return to a land-line for our home number; given no real choice, we had kept our internet with CLink. We shifted our home/cell # to a SIM card, picked a new home number, and it was 'installed' last month. An internet+home phone offer online offered a $100 gift card as inducement, but to my infinite lack of surprise our install was a change not new service = no gift card for us.

For about five days all went well - but then our internet flaked out And our new phone stopped working. A service call placed the blame squarely inside our home, meaning that without their monthly extortion / LineBacker coverage the expense to us would be a Big Deal. We said Hake NO, disconnected our new service and went with VoIP instead. PhonePower accepted the new number and ported it over, and all was well.

For about three days.

Apparently CLink pulled the number after PPower made it work, but before the 'official' install date! How it functioned for several days without being installed, I'll never know - but nothing about this surprises me any more.

So we now have three cell numbers + a new phone number that vanished* + a VoIP home number.
For three people, that's just silly.. but for now we'll see how it goes. The newly-ported cell number is hooked to different cell towers than the other two (T-mobile not ATT) so it could conceivably capture a better signal than the other two. That might lead to new SIM cards all around - or just as likely I toss the whole bunch and go Luddite after I go bald from tearing out my hair.

*Update - I just called someone with caller ID, and the fully-operational voIP number is the 'vanished' one! AAAaaarrRRGH!

2nd update - c-Link turned us off for non payment the same day pPower was "installing" our new phone. We have contacted Hughes Net and will cut the clink cord next week. Good Riddance.

We also ordered a WeBoost 3g signal-plucker to assist our cell phones.
One or more of these will bring us back into contact with the connected world; whether it's worth doing will wait to be seen!

18Apr updates. The VoIP phone calls out but would not be reached from Elsewhere by either of the two numbers; it finally worked (once at least) this morning. The WeBoost system is working well in test mode i.e. cables everywhere and lashed to an outside post with a bungee cord. A more permanent fix will follow soon.