one last lens to confuse everything!

Of the common features that I was missing in my Pentax lens collection, two big ones come to mind.  Weather sealing is one, but without a sealed camera the point is rather lost.  The other is silent focus.  That's worth having for creatures or circumstances where loud noises like a screw-drive focusing system are out of place.

Pentax has several very nice lenses with quiet motors, but generally not at the price point I had in mind (i.e. Cheap).  I found a Sigma HSM 50-200 that would do nicely, but starting at 50mm was not what I'd had in mind when my 55-300mm is so good by every other measure but silence.  Today I found the answer, and it's an answer that I have tried before: Amazon's used warehouse had a Sigma 18-50 f/2.8-4.5  in Good condition for $96.  Good is good enough for me - so I bought it. 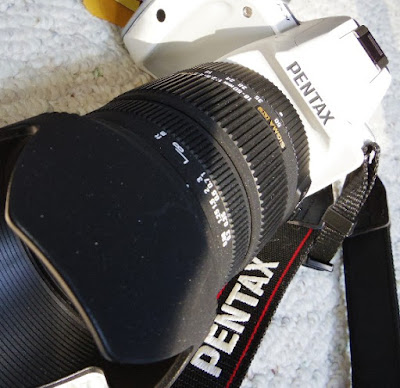 This lens is curious in several ways.  For one it's a budget zoom that put its money into surprising spots: motor, stabilization, focus and zoom are done internally.   Internal zoom designs tend not to appear at the low end of a lens range - but here it is.  The result is not weather sealed yet moisture will not find easy entry with this design.  The silent HSM justifies its place in my bag.  Some reviewers claim the lens OS works a bit better than Pentax' SR but it's hard to justify the effort to switch over for a shot or two; we'll see how often I try it.

Another curiosity is that it competes* with Sigma's own 17-50 and 17-70mm models for shelf space.  Both of those are well regarded but this lens' unique design is unmatched by them. And the price is no contest at all!  *The competition is over in fact: the 18-50 has been discontinued while the other two live on.

As I said I've owned this lens before.  I liked that its zoom ring goes the same way as Pentax, and opposite most other Sigma zooms that I have tried (including those 17-50 and 17-70 models).  It's decent at closeups though it does not compete with a true macro.  The lens is somewhat bulky compared to the DA18-55 but that's because it's f/2.8-4.5 instead of 3.5-5.6 - and the size never changes when zooming or focusing so its bulk never changes shape!

we are all gathered here..

The wedding went off well, gear-wise.  I carried the K-s1 and shot with K24 and DA15, with a pinch of DFA50 thrown in.  Mostly for video but a few still images managed to sneak in as well.  One of the Qs stood in a corner and filmed somewhat continuously, though I left a gap during dinner.  Now to assemble it all into a coherent presentation..


And here at last is the 'full' lineup! 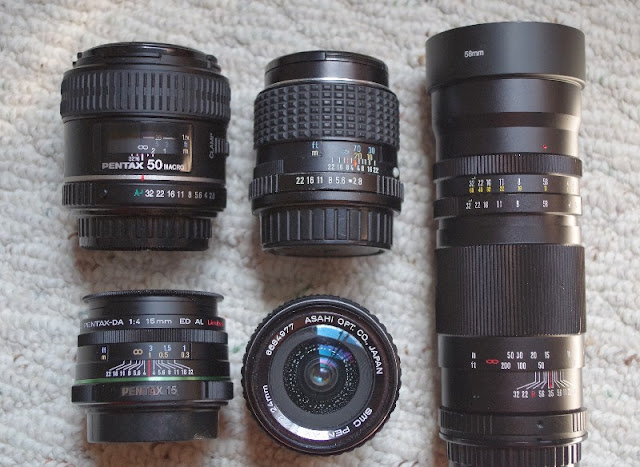 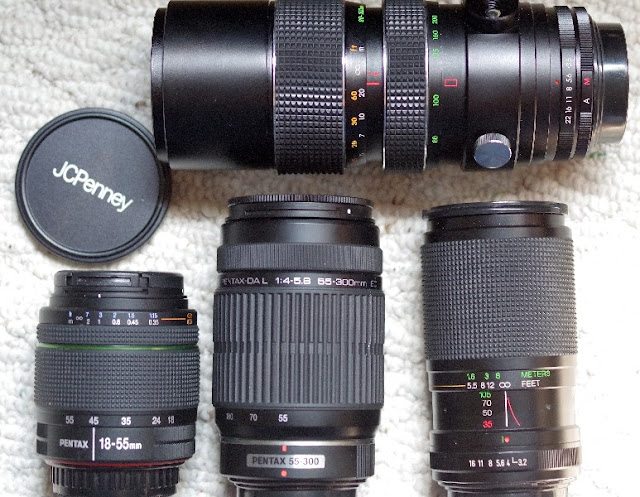 Our two computers both received notice that Windows 10 was ready to go.  They have been waiting patiently while others jumped on board, and today was their day.  Such geeky thrills!

While they went off spinning their discs I found the old:new Vivitar 180mm T-mount prime sitting on my porch.  Man it looks good for a lens that's been around for 50ish years!  This sits between the 100 & 400mm on my list of primes, and looks great while doing so.

A bit later I tripped down to Portland then came home via the local post office; they had left the lens but failed to leave my wife's new:old iPhone 4s (signature required).  Her patience with Android methods has worn out and she likes her iPod, so new tech has arrived.  While my 'droid time has been OK I've had issues with group messaging my siblings, so tomorrow is also geekday when my mint-used 4s arrives.  Never expected that day would arrive.. just don't ask me to love iTunes.

Before bed I finally managed to use my Win8.1 tablet when it had a full charge and all its 8.1 updates.  I found its reserve-Win10 notice and sure enough it was ready to download ..so  it's on Windows 10 now too!

I had contemplated a final prime above 100mm to complete my set.  I sought something curious, but had no idea what it would be.  I knew it would not be a Pentax 150 or 200mm;  I had owned and sold one of each and did not miss them enough.


Then I saw this. 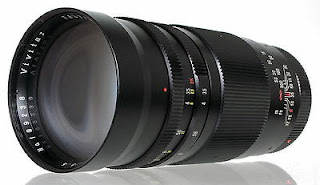 It's an old T-mount Vivitar preset, a 180mm f/3.5, that comes with a MD adapter but of course can use my K adapter.  It is small but Very dense at ~635g, apparently made by Tamron a long time ago.   It uses 58mm filters and hood that I already have for the 55-300.  It also looks like new despite being just a few years younger than me, introduced when Kennedy was President!  Soligor also made a 189/3.5, but it looks a lot different.

So it fits well with current gear and fills the prime gap between 100 and 400mm with a unique instrument.  Why not bid?

My bid stood alone so it was a bargain that will arrive soon.  I look forward to giving it a try!